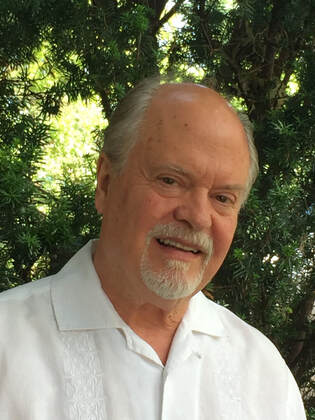 Gene Hamilton has been a professional artist since 1973.

Following over four years of active duty in the U.S. Navy, Gene met his future wife Carlie, while both were attending Drake University in Des Moines, Iowa, where Gene received a BFA, and where Carlie was doing graduate work .

For many years Gene traveled with another artist, Larry Stark, who taught Gene the skills of silkscreen printing. Together they showed their art to dealers, consultants and museums all across the U.S. and Canada, while living in Larry’s various run-down vans. This was a lifestyle Gene remembers as being the basis for “paying his dues” in the art world!

Gene and Carlie worked together in the late seventies and through the eighties to make dozens of editions of serigraphs (also correctly called “silkscreen prints”) in addition to their paintings. Gene’s early works were quite different from his current tranquil subjects. His one-person show at the Des Moines Art Center in 1978 consisted of “Hamilton Trout” art in various media. These pieces were brightly colored strings of sculptural fish, paintings of fish, as well as depictions of fishermen holding trophy fish and other fish-related themes. He also produced shock art, social commentary, and humorous art.